Hi everyone! I’m finally sharing my favorite part of our Super Mario basement, the finish line bookcase. For those of you that don’t know what I’m referring to, here is what we wanted to re-create:

We completed this project first, but our basement has been so messy it was impossible to take a picture! We finally cleaned it out, so now I can share the details with you. It’s super cheap and easy and it really makes the basement. Not only does it incorporate the iconic stair case to the flag pole, it also stores our DVDs and my husbands video game collection.

Where to Buy the Materials…

When we started this basement, I knew I wanted to incorporate the stair case to the finish line and I also knew we needed storage. We went to IKEA for some inspiration and when I came across the cube storage shelves, I knew they would be perfect! It just so happened that they came in orange so we didn’t even need to paint them. We bought three of the four-shelf set and three single cubes to make a staircase. How many you need depends on how many stairs you want and how many shelves you need. For the flag, we already had a pole in our basement so I just bought some black and yellow felt, and used left over pipe cleaners to give it shape.

For the tunnel at the bottom of the staircase, we found my husbands old sports container at my MIL’s house and it was perfect! Before we found this, I was planning on using a cheap round trash can to get the same effect. You will then need some green spray paint unless you are lucky enough to find a green trash can, but I feel like that might be difficult.

We found Mario at Toy’s R’ Us, but I believe you can also find him at Walmart and Amazon as well since you can no longer go to Toy’s R’ Us (I’m still sad about that).

How we Created the Finish Line…

Now for the fun part! This piece was super easy to assemble. First things first, we put together all of the IKEA cube shelves. We then set them up to look like a staircase and used foam, double stick tape to secure the shelves together since we had a mix of the four shelves and single shelves (They are not super sturdy so if you have kids you might want to use a nail or anchor them to a wall). We then put Mario on top and it was beginning to look like the video game!

Side Note: The stars I just randomly found in a pack of foam stars on sale for $2 at Meijer. I just drew some eyes on them with a sharpie.

For the tunnel, you can see it was like a strange camouflage color so we just spray painted it green. That’s it. Super easy to complete this piece.

The flag was also pretty simple. I took a piece of black felt and cut it in the shape of the flag (aka a triangle). I then googled “Mario Flag” and found this image of the bowser flag. 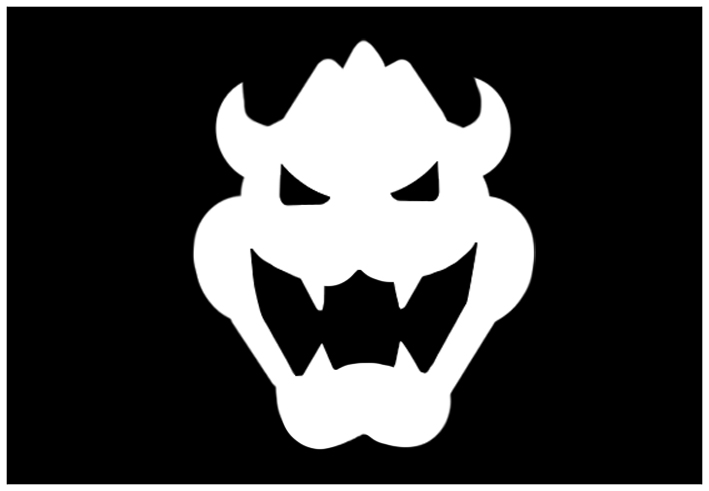 I copied and pasted the image into a word doc and resized it until I found the correct size for the flag. I then cut out the bowser head and glued it onto the flag. I used double stick tape to stick the flag onto the pole. When we first attached it to the pole, it was pretty floppy so I used some black pipe cleaners and lined the edge of the back of the flag to give it some shape and keep it from flopping over. For the yellow portion of the flag, I just cut out a band of yellow and attached it to the top of the pole. That’s it! Mario goal pole completed. 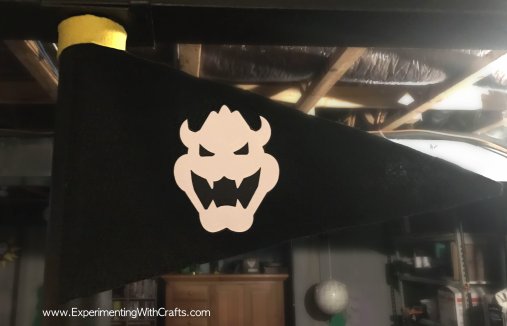 There you have it, the Super Mario finish line is complete! We filled it with all of our DVDs and old video games and it works perfectly in the basement. It also works to separate both of our areas between our “land” and “water” levels. I was super happy with the final result. 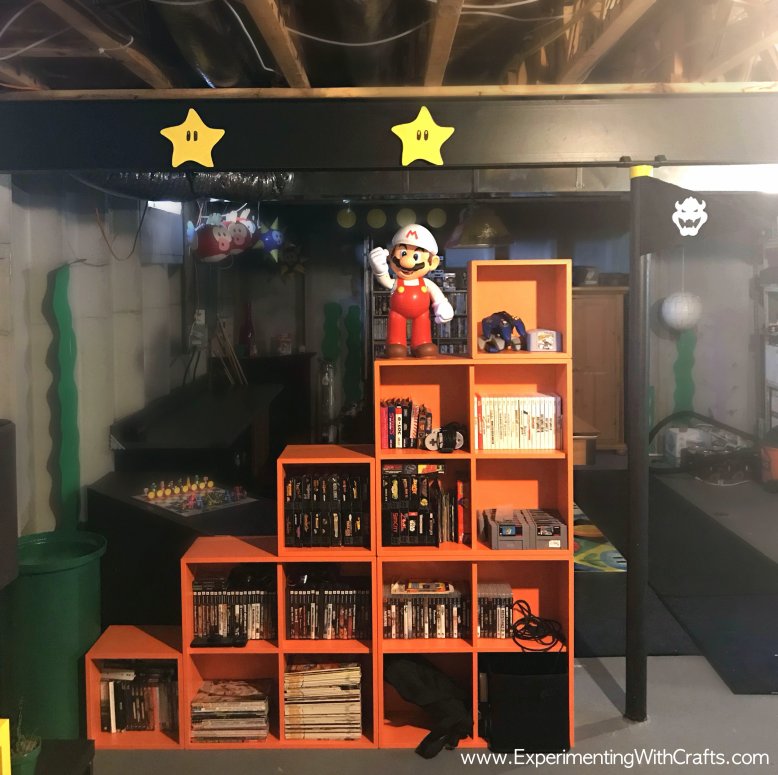 Update: Since posting this blog, we decided to split up the basement a little bit and add a backdrop to the Super Mario bookcase. I purchased a blue velvet curtain from Amazon and cut out a cloud and viola! We now have a Super Mario bookcase with a sky and cloud background. This definitely splits up the rooms in the basement and makes it look a little more finished than it actually is.